Today we decided to make the trek to Bath. Sadly Caitlin was flying to Spain in the afternoon for her 10-day Topdeck tour, so she couldn’t come with us. We left the house quite early in the morning because Bath is a couple of hours drive away.

Upon arrival, we decided to tour around the Roman Baths before it got too busy. They’re quite amazing, but what I found most interesting is that even though they’re below ground now, where they are actually used to be the ground level. It just shows how much the city has been built up.

The statues around the edge of the bath represent all of the Roman emperors plus a couple of other people they thought it worth honouring. They’re not actually originally part of the baths, they were added during the restoration period but they look quite nice and fit in with the overall feel of it. We spent ages in the baths, probably about 2 hours all up because there’s so much to see above and below the ground level. 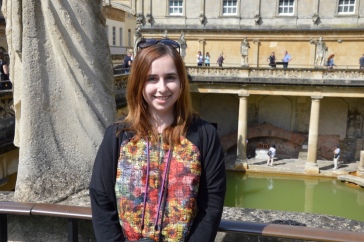 After that, we were pretty hungry so we went and had a cornish pasty, which was absolutely delicious! So delicious that I forgot to take a photo of it, so you’ll just have to take my word for it. Then we walked up through the town, past the house where Jane Austen lived (it’s been quite a Jane Austen tour of England so far!) to a circle of houses which were really cool! I can’t really describe them so I’ll just put the photo in:

Then we wandered back down for a coffee before heading back to the Parry house for more Pimm’s to finish off a lovely day. And, miracle of all miracles, it didn’t rain once!