Once again we’ve come to a long weekend here in China. With no real plans, about a week before I decided to join a bunch of my friends in a trip to Shanghai. We took the Friday off class to extend our weekend out to four days and headed off late on Thursday afternoon (most of existing on around 2 hours sleep after the end of exams party the night before and the 8am class we had in the morning).

We decided before we left to make our first afternoon a quiet one because everyone was quite tired from the night before. So we checked in to our hotel and had dinner at around 9pm before going to bed. I was lucky enough to have a room to myself with a whole double bed and a super comfortable mattress which was really nice after the rocks that we sleep on at uni!

Before we left, Fred (from Switzerland) had done a lot of research into what we wanted to do while we were up there. The first activity we booked in for was one of those escape room adventures. I’d never done one before so I really had no idea what to expect, but it was so much fun! None of us thought we would make it through in under an hour but we actually did it in 45 minutes. It was so much fun that we decided to do another one straight after.

Friday night we headed to the Bund to see the lights and check out some of the local nightlife. It was super pretty by night, even more impressive than during the day. We went to Bar Rouge which is a famous expat hangout on the Bund – the drinks were superrrr expensive so we only had one each but it was a really nice spot.

On Saturday we were all pretty tired so we gave ourselves a sleep in and didn’t meet up until 11am in the hotel lobby. First of all we headed to the Shanghai Propaganda Museum which was definitely an eye-opening experience! Seeing history from a Chinese perspective was very interesting, especially seeing the propaganda from the Korean War (or as it’s called here, the ‘war against American aggression’). 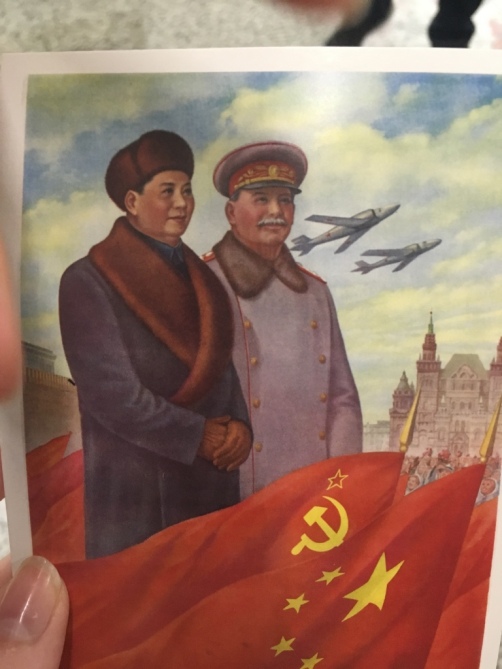 After that we jumped over to Nanjing Rd for some retail therapy. I didn’t really buy much because luggage space was limited and we have most of the same shops down in Hangzhou but it was still nice to walk around. It was incredibly busy, they blocked off some of the streets with soldiers to force people to walk in certain directions. In the evening we went to Tianzifang which are some local handicraft markets in Shanghai. There were so many cute shops and little restaurants, we decided to come back the following night too.

Sunday was our last full day in Shanghai and everyone wanted to do different things so we split up for most of it. We went to the Yu Gardens as a group in the morning, then Jess and I headed off to have some afternoon tea. After that I met up with the others at Nanjing Rd and we went back to Tianzifang to look around and have some half priced cocktails at one of the bars.

On Monday we were due to check out at 2pm. I had plans to meet up with one of my friends from LEGO so I went out to meet her in the morning while everyone else had a sleep in and late breakfast. We checked out at 2 and jumped on the metro to go back to Hongqiao station. Little did we know that our metro terminated two stops before Hongqiao, so we had to get off. The next one was already filled with people so we ended up waiting nearly fifteen minutes for the next one! We made our train at Hongqiao with about five minutes to spare which is lucky because if you miss it you have to buy a new ticket for the next one.

Anyway, overall it was a really nice weekend and it’s great to spend time with my new friends here while we can because a lot of them are going home in July.

Oh update for those that are following – I’ve now booked a trip to Europe so I’m now travelling around Indochina and Europe from July 13 to September 4. So much travel!